Transaction Costs and Tethers: Why I’m a Crypto Skeptic 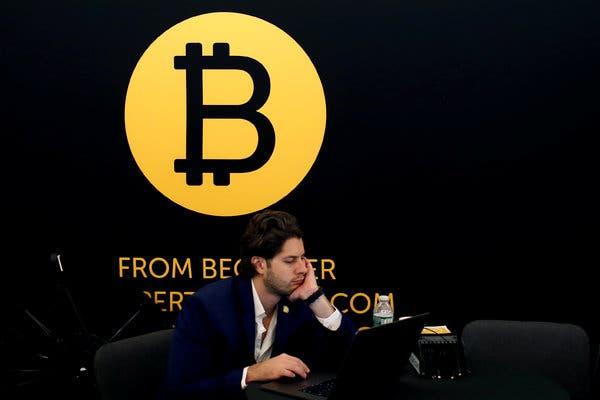 The bitcoin logo on display at the Consensus 2018 blockchain technology conference in New York in May.CreditCreditMike Segar/Reuters

I’m still on vacation, hiking and biking in various parts of Europe. I’m keeping up with the news, more or less, but am only occasionally and unpredictably in a place and condition where I can actually write something and post it.

But this is one of those times, and I thought I’d post some thoughts in advance of stuff I’ll be doing after I get back. Specifically, in a couple of weeks I’m going to play Emmanuel Goldstein — the designated enemy — at a conference on blockchain and all that. Hey, if you only speak to friendly audiences, you’re not challenging yourself enough. So I thought it might be worth explaining why I’m a cryptocurrency skeptic.

It comes down to two things: transaction costs and the absence of tethering. Let me explain.

If you look at the broad sweep of monetary history, there has been a clear direction of change over time: namely, one of reducing the frictions of doing business and the amount of real resources required to deal with those frictions.

First there were gold and silver coins, which were heavy, required lots of security, and consumed a lot of resources to produce.

Then came bank notes backed by fractional reserves. These were popular because they were much easier to deal with than bags of coins; they also reduced the need for physical precious metals, which, as Adam Smith said, provided “a sort of waggon-way through the air”, freeing up resources for other uses.

Even so, the system still required substantial amounts of commodity money. But central banking, in which private banks held their reserves as deposits at the central bank rather than in gold or silver, greatly reduced this need, and the shift to fiat money eliminated it almost completely.

Meanwhile, people gradually shifted away from cash transactions, first toward payments by check, then to credit and debit cards and other digital methods.

Set against this history, the enthusiasm for cryptocurrencies seems very odd, because it goes exactly in the opposite of the long-run trend. Instead of near-frictionless transactions, we have high costs of doing business, because transferring a Bitcoin or other cryptocurrency unit requires providing a complete history of past transactions. Instead of money created by the click of a mouse, we have money that must be mined — created through resource-intensive computations.

And these costs aren’t incidental, something that can be innovated away. As Brunnermeier and Abadi point out, the high costs — making it expensive to create a new Bitcoin, or transfer an existing one — are essential to the project of creating confidence in a decentralized system.

Banknotes worked because people knew something about the banks that issued them, and these banks had an incentive to preserve their reputation. Governments have occasionally abused the privilege of creating fiat money, but for the most part governments and central banks exercise restraint, again because they care about their reputations. But you’re supposed to be sure that a Bitcoin is real without knowing who issued it, so you need the digital equivalent of biting a gold coin to be sure it’s the real deal, and the costs of producing something that satisfies that test have to be high enough to discourage fraud.

In other words, cryptocurrency enthusiasts are effectively celebrating the use of cutting-edge technology to set the monetary system back 300 years. Why would you want to do that? What problem does it solve? I have yet to see a clear answer to that question.

Bear in mind that conventional money generally does its job quite well. Transaction costs are low. The purchasing power of a dollar a year from now is highly predictable – orders of magnitude more predictable than that of a Bitcoin. Using a bank account means trusting a bank, but by and large banks justify that trust, far more so than the firms that hold cryptocurrency tokens. So why change to a form of money that works far less well?

Indeed, eight years after Bitcoin was launched, cryptocurrencies have made very few inroads into actual commerce. A few firms will accept them as payment, but my sense is that this is more about signaling — look at me, I’m cutting-edge! — than about real usefulness. Crypocurrencies have a large market valuation, but they’re overwhelmingly being held as a speculative play, not because they’re useful as mediums of exchange.

Does this mean that crypto is a pure bubble, which will eventually deflate to nothing? It’s worth pointing out that there are other currency-like assets that don’t actually get much use as money, but which people hold anyway. Gold hasn’t been actual money for a very long time, yet it retains its value.

And the same can be said, to a large extent, of cash. While cash transactions are common, they account for only a small and declining fraction of the value of purchases. Yet dollar cash holdings have actually risen as a share of GDP since the 1980s — a growth entirely accounted for by $50 and $100 bills: 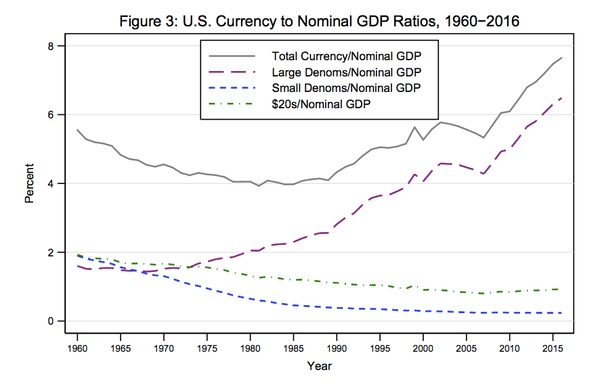 Now, large-denomination notes aren’t regularly used for payments — in fact, many stores won’t accept them. So what’s all that cash holding about? We all know the answer: tax evasion, illicit activity, etc. And much of that is outside the U.S., with estimates suggesting that foreigners hold more than half of U.S. currency.

Clearly, cryptocurrencies are in effect competing for some of the same business: very few people are using Bitcoin to pay their bills, but some people are using it to buy drugs, subvert elections, and so on. And the examples of both gold and large-denomination banknotes suggest that this kind of demand could support a lot of asset value. So does this mean that crypto, even if it isn’t the transformative technology its backers claim, may not be a bubble?

Well, this is where tethering — or, more precisely, its absence for cryptocurrencies — comes in.

In normal life, people don’t worry about where the value of green pieces of paper bearing portraits of dead presidents comes from: we accept dollar notes because other people will accept dollar notes. Yet the value of a dollar doesn’t come entirely from self-fulfilling expectations: ultimately, it’s backstopped by the fact that the U.S. government will accept dollars as payment of tax liabilities — liabilities it’s able to enforce because it’s a government. If you like, fiat currencies have underlying value because men with guns say they do. And this means that their value isn’t a bubble that can collapse if people lose faith.

And the value of those $100 bills sitting in drug lords’ lairs or whatever is in turn tethered to the value of smaller denominations back in America.

To some extent gold is in a similar situation. Most gold just sits there, possessing value because people believe it possesses value. But gold does have real-world uses, both for jewelry and for things like filling teeth, that provide a weak but real tether to the real economy.

Cryptocurrencies, by contrast, have no backstop, no tether to reality. Their value depends entirely on self-fulfilling expectations — which means that total collapse is a real possibility. If speculators were to have a collective moment of doubt, suddenly fearing that Bitcoins were worthless, well, Bitcoins would become worthless.

Will that happen? I think it’s more likely than not, partly because of the gap between the messianic rhetoric of crypto and the much more mundane real possibilities. That is, there might be a potential equilibrium in which Bitcoin (although probably not other cryptocurrencies) remain in use mainly for black market transactions and tax evasion, but that equilibrium, if it exists, would be hard to get to from here: once the dream of a blockchained future dies, the disappointment will probably collapse the whole thing.

So that’s why I’m a crypto skeptic. Could I be wrong? Of course. But if you want to argue that I’m wrong, please answer the question, what problem does cryptocurrency solve? Don’t just try to shout down the skeptics with a mixture of technobabble and libertarian derp.