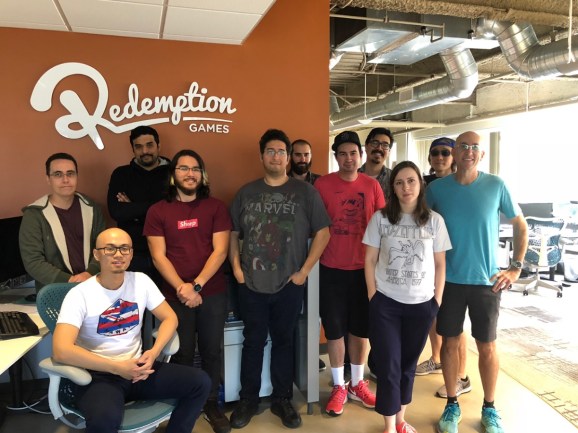 Supercell is flush with cash from billions of dollars in revenues from its mobile games such as Clash of Clans, as well as its acquisition by China’s Tencent. And while Supercell itself wants to remain small, in 2016 it decided to begin investing in promising mobile game developers. Redemption will describe its games later.

Supercell is acquiring a minority stake in Redemption Games, which is headed by Michael Witz and Dan Lin. The latest investment shows Supercell has a lot of confidence in mobile games, which are a challenging market but have become the world’s largest games market, accounting for $70 billion of the $137.9 billion global games market, according to market researcher Newzoo.

“In our investments, we are always looking for the best teams with great culture,” said Supercell CEO Ilkka Paananen in a statement. “Redemption Games has an amazing team of experienced developers, who have a solid track record and true passion for making great puzzle games. We’ve been impressed by their craftsmanship and distinctive approach to game development. This is our first investment outside of Europe and we couldn’t be more excited to partner up with the Redemption Games team.”

Supercell has also invested in Frogmind, Shipyard Games, and Trailmix, and it acquired a majority stake in Space Ape for $55.8 million.

“Like most people in the industry, we have been in awe of not only the games Supercell has made, but the unconventional approach they have taken in making those games,” Witz said in a statement. “They have turned the gaming world upside down and we are humbled and inspired by the bet they are making on us.”

The investment is not part of a publishing relationship, but rather to support the development of new intellectual property (IP) and to bring it to market. The strategic partnership with Supercell will take advantage of the growth model that has allowed it to gross $2 billion in revenue, and $810M in profit in the last year. Supercell only has a few hundred employees.

Witz and Lin have worked together for 20 years, collaborating for 10 of those in mobile gaming. They sold their prior company, Mob Science, to Jam City (previously SGN) in Los Angeles where they led the design and development of the top grossing game Cookie Jam.

Asked why they were starting a new studio so late in the mobile game cycle, Witz said in an email, “Well we are not a new company, but a veteran team that has been together for many years now. We have deep domain expertise of our craft and from our perspective, even though it is a hyper competitive market, we believe there’s still a huge amount of opportunity for growth and innovation. The competition doesn’t scare us, it inspires us.”

Their passion for gaming and entrepreneurial spirit precipitated the formation and success of Redemption Games.

“Motivation for us stems from the craftsmanship of creating a great product,” said Lin, in a statement. “As I’ve told everyone who joins our team, the only promise we make, is that we are only going to ship a game we are proud to put our name on. This means we’re ridiculously stubborn and won’t give up on even the smallest feature until we nail it.”