Proponents of smaller collection and in-season deliveries cite progress — and more work to do. 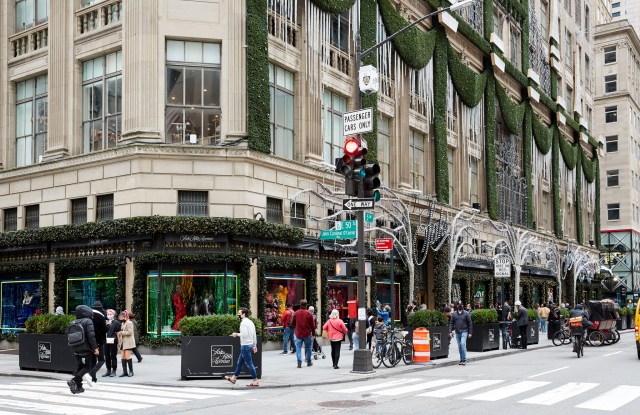 The pandemic forced fashion to reflect on its speed, its waste — and other flaws. And while it got people talking more than ever before about too much product, delivered and marked down too soon, did anything really change?

As 2020 draws to a close, the participants in a grassroots effort and petition to slow down the fashion system say its more than 600 signatories — an array of independent designers and luxury retailers — made encouraging progress, and efforts continue.

“We are extremely proud of the conversation we helped initiate in the industry regarding product calendar, markdowns, and making the fashion system more consumer-friendly, conducive to creativity and sustainable,” said Shira Sue Carmi, chief executive officer of Altuzarra, and one of the ringleaders of the loose-knit consortium that operates under Forumletter.org. “We feel that a lot of positive movement and change has happened already, and we look forward to seeing how it continues to evolve.”

Separately, Saks Fifth Avenue has been urging the industry to implement buy-now, wear-now merchandising beyond what the pandemic has induced. In April, the retailer revealed that it was in talks with vendors to closely align the arrival of new seasonal products with consumer demand.

Dressing Up: Greatest Party Looks From the Fairchild Archives

“The pandemic gave customers an opportunity to experience a delivery cycle aligned with seasonality — a true buy-now, wear-now experience,” Tracy Margolies, chief merchant at Saks, told WWD last week. “For example, when we reopened stores in June (after coronavirus lockdowns), our spring-summer assortment felt relevant and fresh. Ultimately, the customer is the boss and we’ve seen during this time that when our assortment is aligned with the current season, they respond positively.”

Asked about next steps, she said, “We’re continuing to have productive conversations with our partners and while progress has been made, this is a long-term proposition requiring collaboration across the supply chain to enable lasting change. Our ultimate goal remains to provide customers with the best choice of the best edit, where and when they want it.”

Maximiliano Nicolelli, managing partner at Milan-based Hydra Consultancy, applauded the willingness of big and small players to slow down the fashion system.

“While I believe the industry needs more specific and bolder actions in order to make a difference, from luxury brands to mass market retailers, most of the players have started their own journey in order to implement a more sustainable fashion system,” he said, calling the postponement of fall-winter sales by as much as a month “a good start.”

He said he expects more efforts along the supply chain for the fall-winter 2021 fashion season.

“The majority of the brands are adopting in one way or another a more socially and environmentally responsible approach, from big corporations such as LVMH encouraging employees to actively contribute to sustainable luxury through the ‘Be The Change’ initiative to smaller brands such as Acne launching Repurposed, a collection made from deadstock fabrics transformed into new products,” Nicolelli said. “The difference today compared to April is that many of the matters discussed back then are no longer trends or nice-to-have initiatives. Today, being culturally relevant, socially and environmentally responsible and digitally driven is a must.”

Dries Van Noten, another ringleader of Forumletter.org, said “there’s no sense to pick up where we stopped” at the end of the global health crisis.

Speaking at WWD’s Apparel and Retail Virtual CEO Summit earlier this month, Van Noten lamented that fashion show collections had became “more of a marketing tool” given the late deliveries, and early markdowns.

He urged going back to the essence so “we can explain again to the final customer how beautiful fashion can be, the skills that go into it, what the difference is between us and the high street.” The designer also managed to reduce the size of his collections by more than 30 percent.

According to retail-market analytics firm Edited, mind-sets in fashion are increasingly coming around to what it calls the “degrowth movement” — and even fast-fashion is slowing down, slightly. In the U.S. and U.K. combined, new product arrivals for Q3 2020 were 11 percent lower than in 2019, owed in part to a pandemic-induced supply chain pause.

“In 2019, the peak discounting period was in June,” Marci said. “However this year, luxury brands held off until July to discount the majority of products, which at its highest saw 14 percent of their ranges advertised with a markdown.”

Reductions were also less steep compared to 2019. This year, the highest discount was advertised at 46 percent in August, while price cuts peaked at 48 percent in September last year, according to Edited.

“While luxury brands have pledged to rethink their processes and realign calendars to ensure products land closer to season, new processes will take time to implement and if put into practice, we can expect the data to reflect these adjustments in future seasons,” Marci said. “Going forward, sustainability will remain a top priority in 2021, with luxury market players such as Kering leading the way in eco practices.”

One of the tactics for reducing over-production embraced more widely in 2020 was on-demand production, with Ralph Lauren introducing customizable puffers, for example, and Jacquemus taking pre-orders on its spring 2021 collection for the first time, to reduce waste and diminish its environmental footprint.

So far, most apparel using on-demand manufacturing uses a baseline garment — like a basic hoodie or T-shirt — with decoration being done on demand.

About 5 percent of apparel was printed digitally in 2020 so far, up from about 2 percent in 2018, according to Brian Rainey, ceo of Gooten, a tech company that helps online merchants leverage on-demand manufacturing. “Looking forward, we expect the rate of growth to accelerate, with 10 to 15 percent of the industry using on-demand in 2022 as it moves from early adopters into the mainstream.”

Rainey noted major retailers such as Nike have begun to introduce on-demand production and customization into retail storefronts, while Delta Apparel launched a digital print and fulfillment center inside the distribution center of retailer Hot Topic.

“Looking ahead to 2021, we expect to continue to see brands introduce novel approaches using on-demand, as well as more adopting a hybrid model of combining on-demand and traditional manufacturing,” Rainey added.